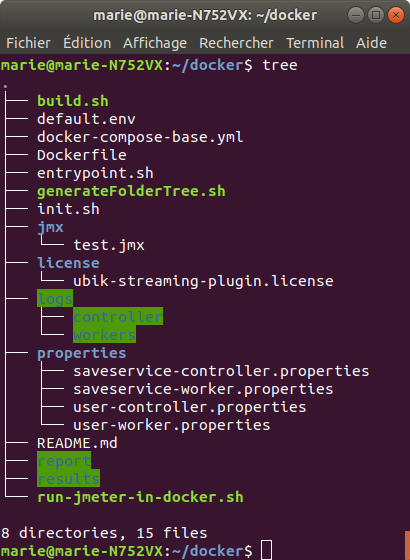 This tutorial will show you how to easily use UbikLoadPack VideoStreaming Plugin with Docker in few steps.

You just have to run some scripts and edit some files. Note that linux is required.

All source code shown in this blog is available from this github repository.

This tutorial shows an example with containers on the same network. But if you want to use UbikLoadPack VideoStreaming Plugin with Docker on different machines a solution would be to run compose on a swarm cluster. In short :

More information about Deploy a stack to a swarm, about Networking in Compose.

To use UbikLoadPack VideoStreaming Plugin with Docker you can follow those steps :

Docker Compose is used by the main executable run-jmeter-in-docker.sh. Therefore you have to install it if it is not already present.

You can check if it is already installed by executing

If it is not the case, you can install it by following the instructions given by Docker documentation : Install Docker Compose

First, you have to run generateFolderTree.sh to generate automatically the needed folders with right permissions. The script is going to ask you Where do you want to generate the folder tree ? (ex: /home/user/jmeter-dockerized)

Next, you just have to input the path to the folder where you want to generate those folders and press ENTER key.

Then, the script creates this folder for you if it does not already exist.

Next, it creates the folders needed for the execution of main executable run-jmeter-in-docker.sh.

run-jmeter-in-docker.sh will need logs, results and report to write some files. So the script gives permission to write those folders and their content for users not in your group.

Finally, it lists the content of the directory you chose at the beginning.

And it gives you last configuration instructions.

For the second step, you just have to follow those instructions : edit and move some files. Then you will be able to use UbikLoadPack VideoStreaming Plugin with Docker by executing the last script.

Secondly, to finish the configuration, you have to :

Choose the test plan you want to execute and place it in jmx folder.

You have to name this file test.jmx.

Place your UbikLoadPack VideoStreaming Plugin license in license folder and name it ubik-streaming-plugin.license

Copy twice your user.properties file and name those copies:

Place them in properties folder.

In both files, property ULP.videostreaming.licensepath must have the following value /jmeter/license/ubik-streaming-plugin.license.

To clarify, you should have following directories contents :

Now you finished the configuration, you can run the main executable run-jmeter-in-docker.sh.

First, the script asks you How many jmeter workers do you want to activate ? [1-14]. By default the maximum number of workers is 14. If you want to change this value you can execute export MAX_WORKER_NB=value to give a value of your choice before executing this script.

Just input a number between 1 and 14, or the value you choose, included and press ENTER key.

Second, for each worker the script creates a dependance of controller for this worker. And also creates the command this worker will execute. Then it adds property REMOTE_WORKERS_TRIGGERED with value jmeter-worker1, ... to jmeter-workern, with n the number of jmeter workers.

Finally, it executes docker-compose up which runs the jmeter controller.

When the run finishes, you can open report/index.html to view your Apache JMeter Dashboard with graphs and statistics.