When Load Testing application, a critical and frequently overlooked task is to validate responses obtained under load.

A Typical issue is to have application return the wrong response to a request but doing so with a 200 response code. In the latter case JMeter (or any other tool) can not guess alone that the response is not the expected one.

It’s up to you to check some content in the response.

How to to that in JMeter:

Let’s see how to do that in JMeter, you do that using Assertions. There are many types of assertions in Apache JMeter, we’ll zoom on the ones that you will use in 99% of the cases.

You will usually add it as a child of the Sampler you want to check: 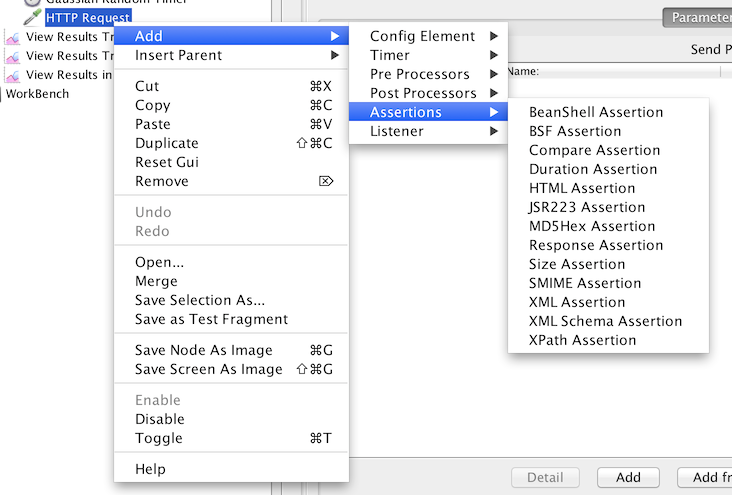 But be aware that you can add them at a higher level, thanks to JMeter scoping rules, it will then apply to all requests under this scope.

First of all, let’s examine Response Assertion which is the most powerful assertion.
It is composed of 4 Zones:

Another interesting assertion is Size Assertion.

This assertion is useful in many case where Response Assertion cannot be used:

As for Response assertion, we have the same zones:

We have a new zone “Size to assert” which will tell JMeter how to compare the input value with the Variable or the selected zone size.

Finally, the last type of assertion is more advanced and will be usually used when none of existing assertions can do the Job.

It relies on one of the most interesting features of JMeter, which is its extensibility with any Scripting language that provides a JSR223 bridge.

JMeter since 3.0 has Apache Groovy natively embedded, as it supports “Compilation” feature, it’s a good fit in terms of features and performance.

What happens here is the following:

This example is very simple but it shows you how this assertion works, you can use all the power of Groovy in it

As a summary, we’ve seen in this blog is that checking responses in a Load Test is critical for load test validity.  JMeter makes this checking very easy and flexible.

As you have also seen, our Video Streaming Plugin integrates very smoothly with Standard JMeter and lets you create custom assertions on the metrics it exposes.